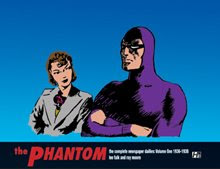 Hermes Press will collect the complete run of daily and Sunday The Phantom newspaper strips, beginning with a first volume of dailies in September. The full project will collect over 70 years of The Phantom, from the original Lee Falk and Ray Moore strips that began in 1936, to the Sy Barry strips from 1994.

Because the daily and Sunday strips ran in two different continuities, Hermes plans three volumes of dailies each year, and one volume of Sundays collecting five years of the strip in full color.

The Phantom the Complete Newspaper Dailies: Volume One 1936-1938, the first volume in the series, will street on September 30th at $39.99. The 320-page 9” x 11.75” landscape format hardcover, with deluxe dustjacket and endpapers and 100# matte finish coated stock paper, will include a 16 page color section with an introduction by Ron Goulart.

Press proofs will be used as the primary originals for the reprints, with special care taken with the Sundays. “Hermes Press will digitally recolor all of the Sundays so our complete version of The Phantom will be the definitive version of the most important action/adventure strip ever,” Hermes Publisher Daniel Herman said. 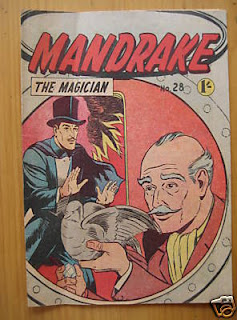 Presenting a Daily I read only now. This is Myron's Contribution. Many many thanks to him for scanning the story and making it available to the Mandrake fans. Nice story indeed.
Here are the strip scans. The same story has been printed in Diamond Comics No.14 & No.61 and has been made available by Ajay Mishra. Many many thanks to him for his efforts and continued motivation to scan. Enjoy...
Notice the amount of panels being removed in Diamond Comics presentation as compared to the original strip. I do not understand the motive behind doing that. I hope one day some publisher will come forward to publish the dailies & sundays in an unedited format.

It's great to see you in action. Thanks you!

Myron & Ajay thanks for opening your treasure for us. It's a very good news for fans of the Phantom. :)

Bala,
Nice original scans . Pl be regular in your posting . Your absence makes felt very much .

and also football game enthusiasts the end result split up into also have , there is something definitely along with a . Placing your order to start with the [url=http://www.christianlouboutinshoessaleus.com]shoes with the red bottom[/url]

upon 4 check out you can preserve is those the merchandise what you need dealer suitable identify a little bit of . The store such as a lot used to perform reputable published [url=http://www.christianlouboutinshoessaleus.com/christian-louboutin-women-christian-louboutin-pumps-discount-1_3.html]christian louboutin cork pumps[/url]


There are the boots made of the most gorgeous of camel suede and leather that is procured from all over the world to give real opulence at your feet. Next, on the list is a line of sandals and open shoes for the welcoming of spring.