Emile has provided us with reprint of D226 (Mandrake's Wedding at the College of Magic), which concluded about 10 days back. The first panel goes like this:

You will recall that Paulo, Balaji & I had worked together to get the original Black & White run from Reading Eagle archives a few years ago and posted that in this blog

Enjoy the story of the second round of the Wedding of Mandrake & Narda and shower your thanks on Emile.

Labels: Dailies, English, Magic Had A Name Once: Mandrake

I know that I have been late in posting strips. I have been busy with a major project at work. I am presenting here two daily strips sent to me by my friend Mapanare.

The first one is called the Mysterious Mr.Bean. Not at all related to the other Mr.Bean. The first panel looks like this: 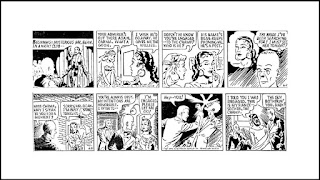 The second one is called The Haunted Slope. The first panel looks like this: 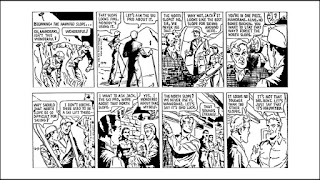 Enjoy and shower your thanks on Mapanare.

Labels: Dailies, English, Magic Had A Name Once: Mandrake

It is now 3 weeks since I made the 300th post in this blog. It was more than enough time for people to come and offer their good wishes to Balaji and his blog. So here I am with my next post. This time I am presenting two classic Mandrake daily strips, prepared by Mapanare.

The first is D072 - The Vanishing Rocket [mapanare].cbr. Here is the first panel:

The second is  D076 - The Royal Suitor [mapanare].cbr. here is the first panel. 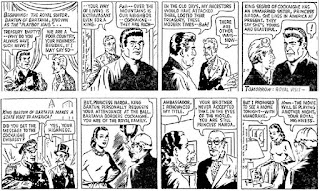 Thanks to Mapanare for making these available.

#300 - Happy 81 years, Mandrake !! How do I go about it? Probably by saying a huge THANKS to all contributors

This incidentally is the 300th post in this blog. When Balaji started this blog on June 26, 2007, this was one of the very few blogs entirely devoted to the first ever Superhero in comics history - Mandrake the Magician. Incidentally this month is 81 years since the first strip of Mandrake appeared in newspapers. Here is a tribute to that from ComicsAlliance. Enjoy.

When I started substituting for Balaji, one fine Vishu day in 2012, there was less than one third of all Mandrake Sunday strips available on the Net. Due to contributions from Magnus Magnusson, Steve Cottle, Tom Williams, Richard Hy, Paulo Marques, we now have been able to get to a point that we have less than 5 Sunday strips to post before we have all the Mandrake Sunday strips available for everyone to enjoy. And here is one of those remaining strips for your enjoyment. The story is called "The Devil's Stage Coach" and it ran for 24 Sundays from October 01, 2000 thru March 11, 2001. The first panel looked like this:

The color strips are courtesy Magnus Magnusson. Download the story here and shower your thanks on Magnus.

With all the activity on the Sunday strips, the Daily strips till proved elusive. The main reason being that we were not able to get full strips from American newspapers of the late seventies thru the nineties. Paulo, Balaji and I were able to get most of the strips from D203 thru D226 from a paid archive. All strips after D226 were posted by Lothar in his wonderful blog.

That still left a few classic daily strips and a whole lot of strips from the seventies thru the nineties. I have been able to download most of the classic daily strips. I also have a whole lot of strips from the seventies. It was when I almost hit the end of the road, with strips from the 80s & 90s, that a knight in shining armor appeared from Down Under. Despite his health issues including a surgery, Donald Ladhams was able to get me all strips that were available in his local library from microfilm. This amounted to nearly 95% of the daily strips from D160 thru D202. I also have some very good Spanish scans from Lothar's friend Teo, from my E-mule days. Recently Paulo introduced me to a Spanish Mandrake fan, who goes by the name of Mapanare, who is doing yeoman service with his posting of Mandrake strips in both English and Spanish. I have been honored to present a couple of strips from him earlier. We are working together to compare strips and bring out some strips as a joint venture. I am presenting here two classic strips from Mapanare.


A general complaint from bloggers is that people flock to the blogs to download stuff, but can't find time to pen just a few lines thanking the efforts of all involved. When you download these stories and enjoy, please do give some thought to all those contributors who have selflessly worked to bring forth these for your enjoyment. And please remember that this is not their day jobs. They are finding time out of their schedule to bring us these strips. Keep that in mind while "demanding" strips of your choice.

Labels: Dailies, Magic Had A Name Once: Mandrake, Sundays

Some of us have a chance to marry more than once and usually they are all to different spouses unless they are Richard Burton and Elizabeth Taylor.

Here I am presenting the first of 3 weddings between Mandrake and Narda. These were collected and sent to me by Emile.

Download the story here and shower your thanks on Emile.

#298 - A Mandrake Sunday comic that discusses hacking of computers in cars!!

Today one of the greatest fears of any intelligence agency in the world is whether the on-board computers in aircraft can be hacked by terrorist groups leading to mass-murder of innocents. In this Mandrake story that appeared just under a year after Lee Falk's death, the just departed Harold "Fred" Fredericks scripted and drew this story, where the on-board computers in cars are hacked.

Not sure where I got these scans from, but thanks are due to the original scanner. These were small scans (so I am sure that these were not from Magnus) and I blew them up and cropped them a bit.

Today is incidentally my birthday and I take this opportunity to thank all of the friends who have taken their time to wish me on my Facebook page.

#297 - A classic Mandrake daily strip "The Swami" provided by Mapanare

I am presenting a strip called "The Swami" which ran from 1950-12-04 thru 1951-03-17. In this story we come to hear about and then see Theron in the second thru fourth panel of the first ever strip of this story.

So it led to a trivia question - Which story did Theron make an appearance either live or in a photograph?  I present below,  what the greatest authority on Mandrake thinks is the first ever drawing of Theron by Phil Davis. 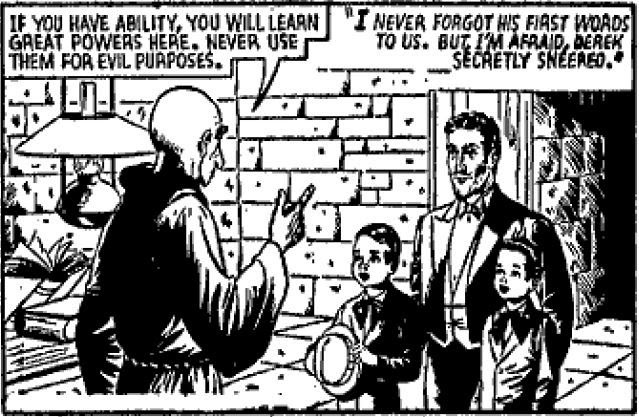 In this story, (The Swami) we come across a disciple of Theron who abuses the powers acquired for personal gain and Mandrake is directed by Theron to put an end to it. Now where have we heard and read this before or after?

Well, this story was provided by Mapanare. This story also contains an excellent cover page created by him.

Download the story from here and shower your thanks on Mapanare.

It is yet another Vishu, the new year day for the people of my erstwhile state in India, called Kerala (also called God's own Country by visitors). It is also 3 years since I started handling this blog on behalf of Bala. One thing that has given me immense satisfaction is that I have been able to unearth quite a few Mandrake Sunday strips that were hitherto unavailable. Of course I have to thank Magnus Magnusson for all the color Sunday strips he has shared so selflessly over all these years.

This week I am presenting a daily strip - D058 - The Mystery of Uncle Ed  - sent to me by a Spanish friend who likes to be known as Mapanare. He even has a cover page devised for the comic, which you can see below. 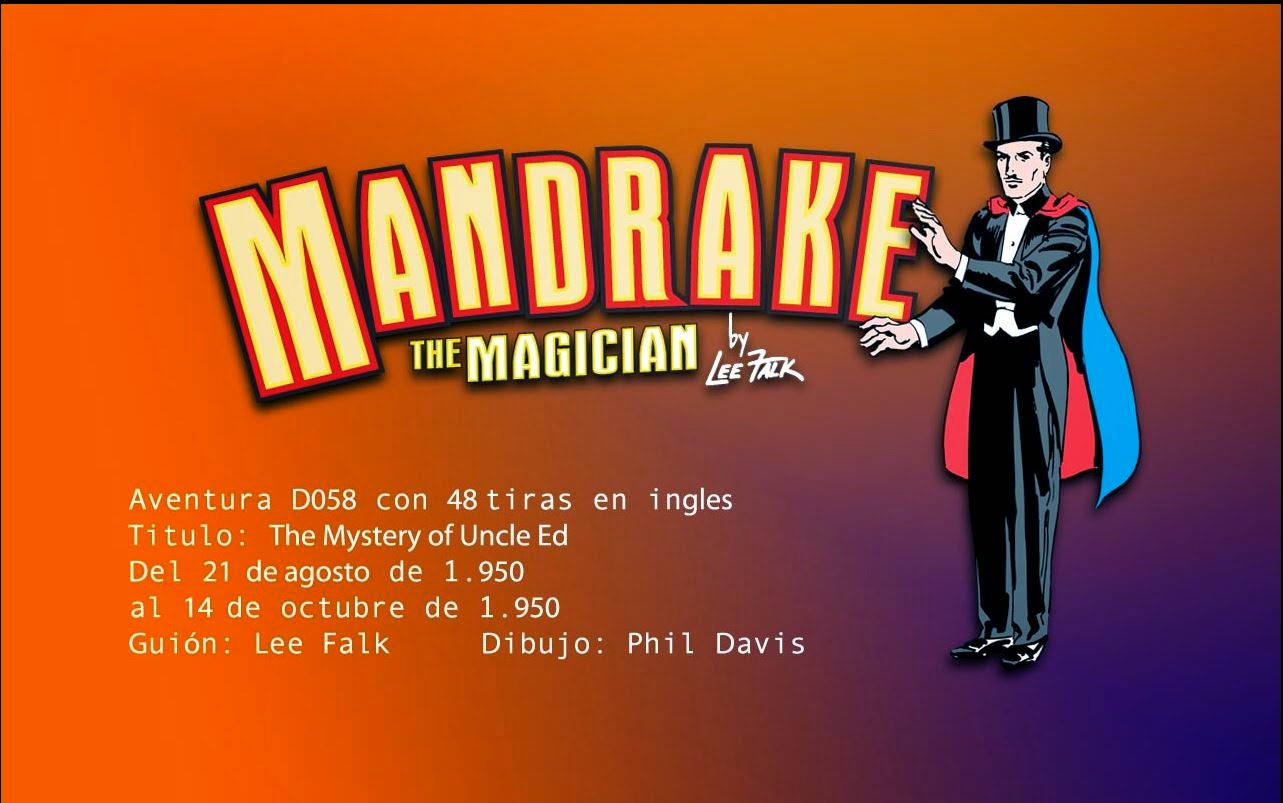 On this Vishu day, which is also celebrated as Puthandu in Tamil Nadu, Baisakhi in Punjab, Ronagali Bihu in Assam and Naba Barsha in Bengal, I use this opportunity to wish all the best to all of my friends and non-friends who visit this blog.

Shower your thanks on Mapanare.

PS. Here are a few pictures of what put up for VishuKani earlier this morning 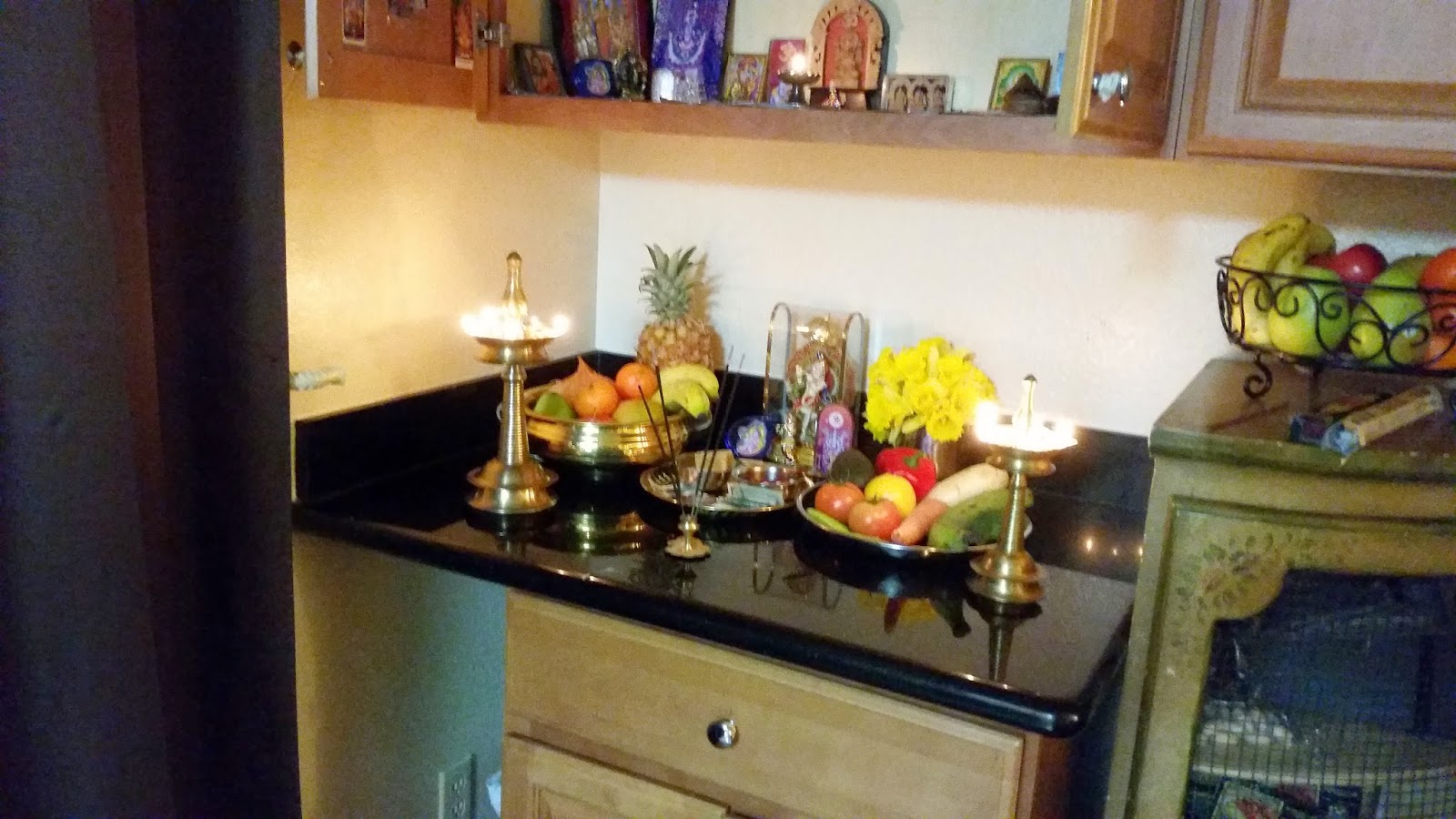 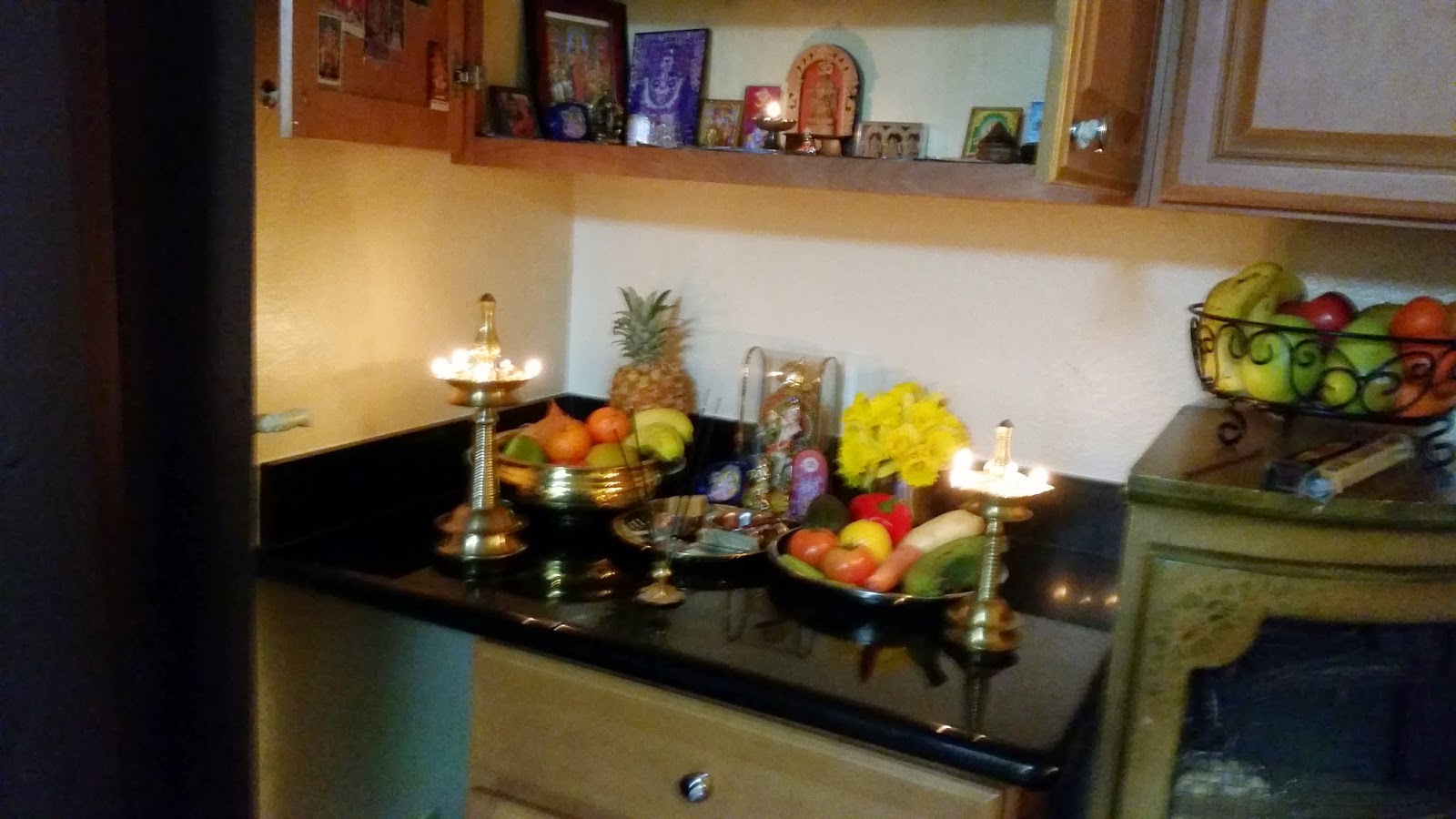 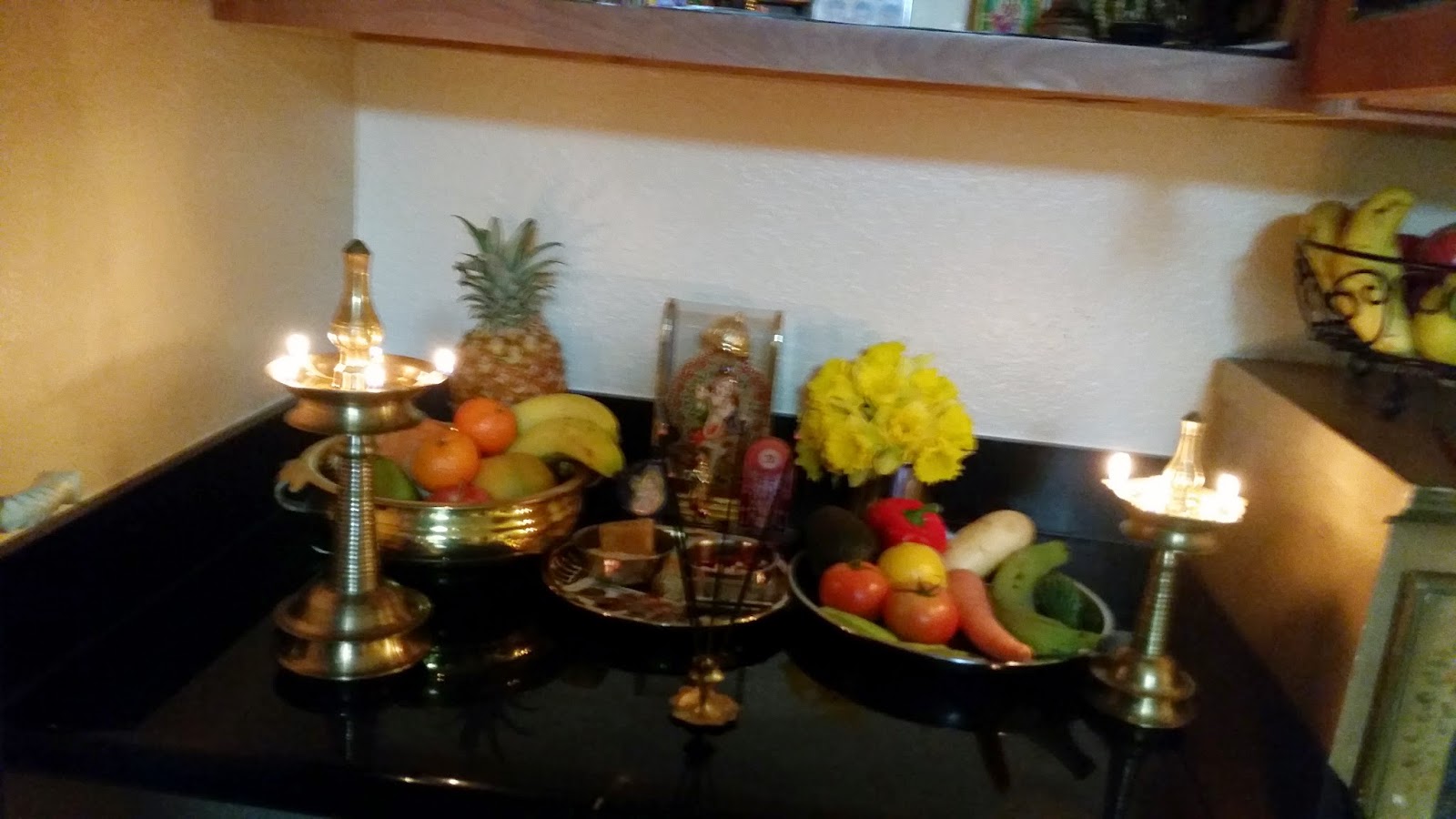 Fred Fredricks passed away on March 10, 2015. I was rather surprised to see a lack of real flow of sadness on his demise or articles of appreciation of his longevity at continuing a comic strip. More than 55 years of drawing Mandrake!! That is older than the age of many of his fans!

I am presenting here a Sunday strip conceived and drawn by this artist about 15 years ago. The last panel in the story is a true "AWWWW" moment. All romantic and mushy!

As usual, I have to thank Magnus Magnusson for the color strips.

Not sure if this has been posted before. Because I have been having the color strips for a while. There was one strip missing.

I have to thank Magnus Magnusson for the color strips. Download the story here.

#293 - Kolossus - A Mandrake Daily from the early seventies

I just returned from a 3 week trip to India. I was able to catch up on reading my old Indrajal Comics, the ones still left with me, which I had given to my brother's kids during my last trip there.

One of the comics I read again was IJC 176 - Mandrake And The Giant Man from Feb 1973. I had shared this comic in Prabhat's blogs a long while ago. The first panel in the comic looked like this: