I am presenting here the second part of the Kraken series called "The Floating Island". Not sure if it should have been split into 2 stories. For IJC lovers, this was published in 2 parts Vol 25 Nos 44 & 45 in 1988. 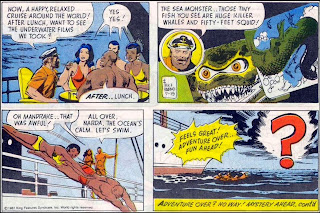 The colored strips are all courtesy Magnus Magnusson.The B/W strips were got by me from various sources, as evidenced by their different shapes and resolutions.

This is yet another Mandrake newspaper strip sent to me by my Australian friend Donald Ladhams, with another familiar Mandrake fan Paulo Marques, helping me with extracting and editing of the strips. There were a few missing strips and Paulo was able to get those.  I just increased the size of the individual files. We have not done extensive edits. So you will be still seeing some dark lines and black spots.

There is a Tempo Books version of this story available on the Net and it was posted by Balaji, owner of this blog, quite a while ago.

You will notice that this is one of the very few story telling sessions in Xanadu, where Narda does not wear a bikini. To make up for that, Jill wears one.
For IJC lovers, this story came as 294 - The Satan's Man in 1978

All gratitude to be expressed to Don and Paulo.

There have been some stories of Mandrake that appeared as a series. One of the first and long series was the Flame Pearl Series, which ran from 04-21-1940 thru 04-12-1942, nearly for two years. With help of some friends, the whole series was presented in this blog a while ago.

Another series which captured the imagination later down the years and was similar to "The Flame Pearls" in that the adventures all happen during the course of journey on a ship, was "The Kraken".

The following were the stories in this series :

I have been able to get all strips for all these stories except the last 2 strips in S157. If any reader has these strips, please send them across to me. The first story is available in many forms on the Net. I do not have the second story complete as I mentioned earlier. So hear is the third story.

This is yet another daily strip that, that I hope, has never been presented before completely in English. For Indrajal Comics fans This was printed as No 290 in 1977 as "The Trickster", with quite a few edits.

This was again sent to me by my Australian friend Donald Ladhams, with another familiar Mandrake fan Paulo Marques, helping me with extracting and editing of the strips. I just increased the size of the individual files. We have not done extensive edits. So you will be still seeing some dark lines and black spots.
Download RS version from here
Download MF version from hereEnjoy the story,Venkit
at Saturday, June 08, 2013 1 comments

These are two short Mandrake stories sometimes treated as one story. Since I follow the numbering system followed by Deepwoods.org and Lothar, I am posting these as  separate stories. For Indrajal Comics fans, S122 and S123 were combined as one story - IJC_236-1975_Mandrake_TheToweringColossus.

The color strips are courtesy Magnus Magnusson. So all thanks are owed to him.

Not sure if these strips were posted earlier in any blog. If they were, I crave forgiveness.