Pop culture in America (probably the world around) has, in the name of liberalism, often been in the forefront of shining light on controversial subjects, to a great extent. One such topic is environment awareness, which started off as a movement to educate people about the effects of man's action on the environment. It has now deteriorated into eco-terrorism and a whole new false religion called "Climate Change".

We see in this story, Lee Falk having some dolphins lecture Mandrake and friends on the ill-effects of oil spillage into the oceans, just 6 months after one of the biggest environmental disasters in history - The Exxon Valdez incident of March 24, 1989.

This story has a special place in my heart. It was the sharing of the Italian language version of this story, that helped me become friends with one of the greatest (but very silent) fans of Mandrake comics - Paulo Marques - who shared a very rare Sunday strip (The Pacifica) and a whole lot of Mandrake daily strips including the two Mandrake Wedding stories, without much ado.

Here is a Sunday strip, part of the Kraken series that was never published in IJC. Nothing great about it as a story. A rehash of a few of Lee Falk's earlier stories. The only change is that the protagonists are on a voyage and on land in between voyages.

In my last post I had expressed the hope that a Knight in shining armor, would come forth with a full color version of the S007 (The Treasure Hunt) strip. And sure enough, a full color version has been provided to us by none other than Magnus Magnusson. How does one thank a person who has been so selflessly sharing whatever Mandrake strips he has been able to get from various sources. There are obviously no words that can express the gratitude.

Thank you, Magnus, once again. 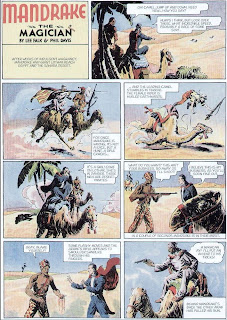 
I would also like to bring to all of you the address of  a publishing house in Norway, which has been publishing 3 full color Sunday stories in a single book, since 2005. The cost comes to about USD 60.00 per book.
Thule Forlag AS
PO Box 4006
N-2306 HAMAR
Norway


Now to the disheartening news:
It is now official. The other day King Features came out with the news that Fred Fredericks has officially retired at the end of July and they would be resorting to regular reprints of strips starting from September 2nd, 2013, much like Flash Gordon. There have been a lot of comments in Daily Ink after that notification calling upon King Features to create a new team and continue the Mandrake strip. Hopefully the "powers that be" in KFS will listen and create a new team that can come out with good stories and art. Thanks to Fredericks for having imparted joy to a lot of people even after the demise of Lee Falk.

I had planned to post the Kraken series in chronological order, but took a detour to post S177, in response to a request by Magnus.

Here I am  with the next instalment of the Kraken series, which also happened to be the last installment of the series published by Indrajal Comics. This was published as Vol 26 No 36 in 1989 as The Mystery Of The Singing Rocks. Only two more Mandrake stories appeared till the whole venture wound up and they were reprints of Daily strips 201 & 202.

P.S. There are just 22 more stories and we will have all Mandrake Sunday strips online between this blog and Lothar's blog. I have been able to get 21 of them complete in B/W from various sources. S007 is the one strip that I have kept to the last, as I am looking for better versions of certain panels. Maybe a knight in shining armor will give us a full color version in English?
at Saturday, August 03, 2013 3 comments